The European Committee for drawing up Standards in the field of Inland Navigation (CESNI) met online on Tuesday 13 October 2020, with its President, Mr Dabrowski, and members of the Secretariat in Strasbourg. Eleven Member States (Austria, Belgium, Croatia, the Czech Republic, France, Germany, Luxemburg, the Netherlands, Romania, Switzerland and Slovakia), as well as the European Commission, the River Commissions (for the Danube, Moselle, Rhine and Sava), six approved organisations (CEMT, EBU, ESO, ETF, GERC, IVR) and Ukraine (in its capacity as Observer State), participated in the meeting.

The meeting of the CESNI was an opportunity to discuss the current and future activities of the Committee and of its Working groups in the fields of technical requirements for vessels (CESNI/PT), professional qualifications (CESNI/QP) and information technologies (CESNI/TI). Several standards and various documents were adopted during the meeting. 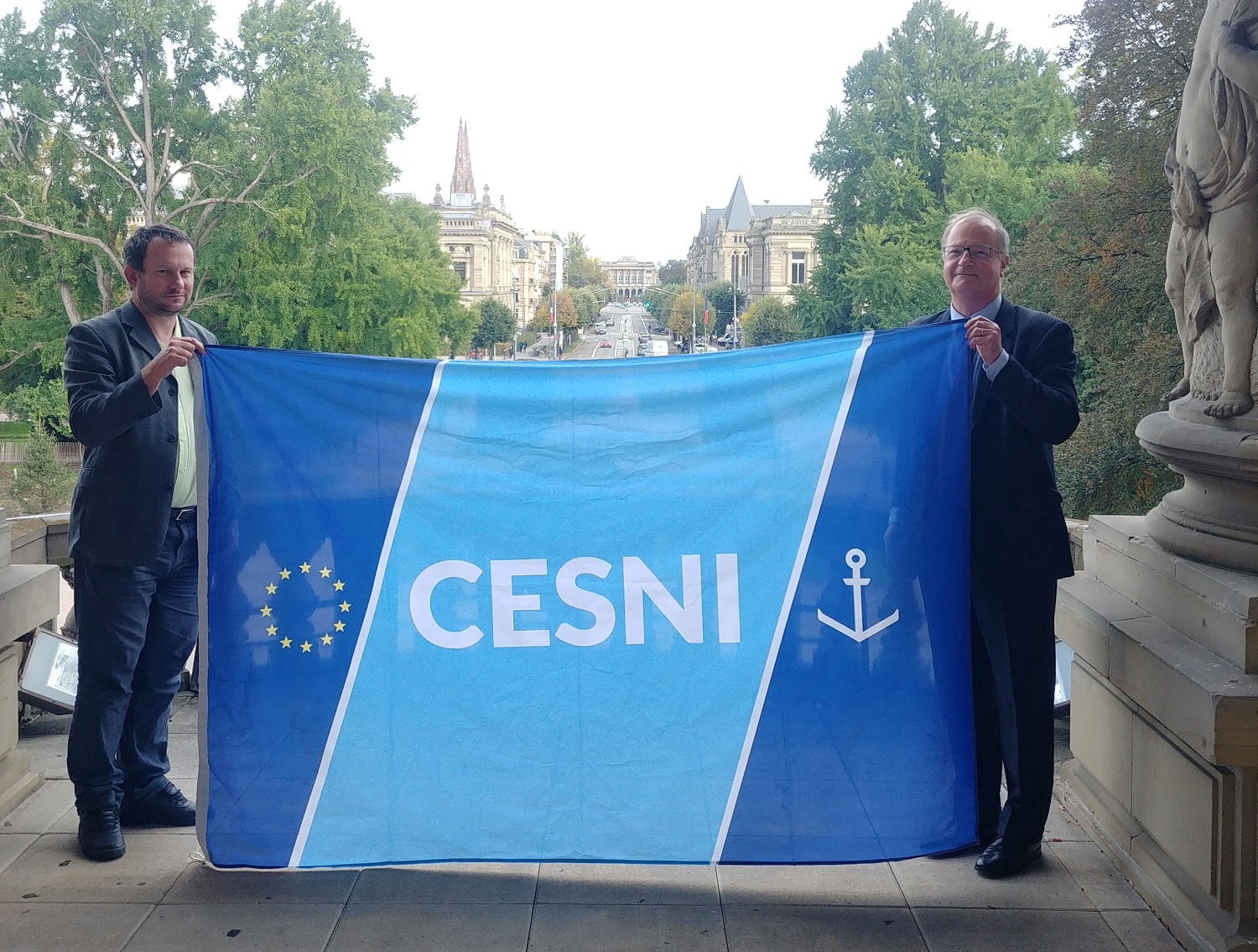 The Committee adopted the 2021/1 edition of the European Standard laying down technical requirements for inland navigation vessels (ES-TRIN). This new edition of the Standard, replacing the 2019 edition, became necessary to introduce important amendments concerning in particular requirements related to:

• European and international standards for vessels that are operated only on waterways outside the Rhine;

For recall, ES-TRIN is not binding per se, the European Union (EU), the Central Commission for the Navigation of the Rhine (CCNR) and other international organisations or third countries can apply this Standard by referring to it in their respective legal frameworks.

The EU and the CCNR intend to enact ES-TRIN 2021/1 in a coordinated way, with effect from 1 January 2022, by means of a reference in their respective legislative frameworks.

The CESNI also took note of the updated document on frequently asked questions (FAQs) aiming at helping those active in the sector to understand and implement the requirements that apply to inland navigation vessel engines under Regulation (EU) 2016/1628 on Non-Road Mobile Machinery (NRMM) and ES-TRIN. This new 2020 edition includes:

Finally, the website listes.cesni.eu was updated with available EU stage V engines and recognised technical services. The list of available engines contains eight manufacturers able to deliver 19 different types of approved engines up to a power rating of 530 kW.

First FAQs and other activities in the field of professional qualifications

The CESNI took note of the answers to the first FAQs in the field of professional qualifications prepared by the CESNI/QP Working group:

The Committee approved the publication of these FAQs on the dedicated CESNI/QP webpage.

Other FAQs are in preparation at CESNI/QP level, in particular concerning the standards for the approval of simulators.

These FAQs aim to facilitate the application of the standards and to promote consistent interpretation by the concerned parties.

In addition, two new standards finalised earlier this year (standards for the basic safety training for deckhands and standards for standardised communication phrases in four languages (see CESNI’s press release of 30 April 2020) will be put on the agenda of the next meeting of the Committee on 15 April 2021 for adoption. However, inland navigation schools and training institutes can already use them in their programmes from now on.

The Committee was also informed of the substantial progress of the work of the temporary working groups:

Adoption of the Test Standard for Inland AIS 2021/3.0 and discussions on the ES-RIS and ERDMS database

The CESNI welcomed the conclusion of more than a year of joint efforts in the information technologies field by the various Working groups (PT and TI) to update the Test Standard for Inland AIS. This Standard defines the operational and performance requirements, methods of testing and required test results for Inland AIS equipment. Adopted during the meeting on 13 October, this new edition 2021/3.0 of the Standard incorporates technical developments by the International Telecommunications Union and International Electrotechnical Commission. The CESNI supported the application of this Standard with effect from 1st January 2022.

For recall, the Test Standard for Inland AIS is not binding per se. The European Union, the CCNR and other international organisations or third countries can apply this Standard by referring to it in their respective legal frameworks.

This document will make it easier to implement RIS and encourage harmonisation in the regulatory frameworks of the European Union and the CCNR. It should be adopted by the CESNI in April 2021.

The ES-RIS will be regularly updated to reflect technological innovation and inland navigation requirements. The CESNI therefore decided that a new version of the Standard would be adopted every two years. To that end, the Committee adopted a roadmap providing for the adoption of a second edition of the ES-RIS in October 2022, at the same time as its equivalent for vessel technical requirements, the ES-TRIN.

Finally, the CESNI recalled the value of a centralised database containing all the RIS reference codes and geo-locating the most important facilities to be found on European inland waterways. This database, known as ERDMS (European Reference Data Management System), is an essential component in the development of RIS and a main tool for ensuring the safety and prosperity of inland navigation. As part of its work programme, the CESNI adopted a report articulating proposals for improving the quality of the data held in the database and the service provided by the operator, as well as for developing the associated governance. The objective being that this database will become more agile in responding to user needs.

In April 2020, the Committee invited its Working groups to carry out a mid-term evaluation of the 2019-2021 work programme and to propose justified adjustments, including changes of priorities, to address the urgent issues related to the Covid-19 crisis without hampering the safety and sustainability objectives. On 13 October, the CESNI took note of the mid-term evaluation prepared by the Working groups and validated the proposed modifications.

In the three Working groups CESNI/PT, CESNI/QP and CESNI/TI, most of the tasks are ongoing and several have already been completed. However, the current Covid-19 pandemic partly complicates and delays the progress of work and the execution of certain tasks.

Beyond its work programme, the Working group CESNI/PT has dedicated time to sensitive issues, such as the safety of lithium-ion accumulators and the discharging of waste-water by passenger vessels. The attention of the Committee was also drawn to possible new requirements in ES-TRIN, especially in view of its impact on existing vessels in the context of the post-Covid-19 recovery. In the light of the sustained health crisis, concrete proposals to give less priority to several tasks have also been made. However, the tasks to be postponed should be limited.

The Working group CESNI/QP did not consider it necessary to adjust the work programme. Nevertheless, it had identified, at this juncture, the possible interest to pay more attention to e-learning activities, since these had proved to be of particular importance during the closure of training institutes/schools. The Working group agreed that it was necessary to work on a better understanding of the individual progress of e-learning concepts and to evaluate the progress of blended learning in times of the Covid pandemic.

The CESNI workshop on data collection on accidents in inland navigation took place online on 12 October (afternoon) and gathered more than 70 guests and speakers.

The main objective was to bring together different stakeholders (member states, insurance companies, EUROSTAT, representatives of science etc.) with a diverse understanding of the question of collecting accident-related data. They were able to exchange on existing data collection methods, the use and analysis of data, existing shortcomings but also best practices.

The event enabled participants to acquire solid and varied knowledge on the subject. Different methodologies and statistical concepts were presented as well as the work of the Platform Zero Incidents (PZI) and the EUROSTAT Task Force – good examples pointing in the direction of greater harmonisation in accident data collection across Europe, which would be welcome but has yet to be realised. The workshop participants identified as a major challenge the search for the best balance between comprehensiveness and quality of the data. It was suggested that a first step could be the development of a minimum data set, that should be simple enough to engage people in providing quality data, but also sufficient to get enough data to analyse causes and learn from them.

An open discussion at the end of the Workshop revealed differences among participants with regard to the purpose and motivation of accident data collection. The importance of questioning “why are we collecting which data?” was highlighted by almost all speakers. The common goal of less accidents and improved safety for inland navigation united all participants; only the ways, instruments and uses of databases were quite different.

According to EUROSTAT, no regulation at European level was envisaged in the near future. Therefore, the work of CESNI as a platform for exchange and as a committee for the adoption of standards in inland navigation could play a very useful role.

The CESNI was pleased to grant EFIP the status of approved non-governmental organisation and invited the federation to participate in its future work, especially in the field of information technologies.

EFIP brings together nearly 200 inland ports and port authorities from 18 countries of the European Union, Switzerland, Serbia and Ukraine. It upholds and promotes the essential role of inland ports as nodal points for intermodal transport, combining road, rail, maritime and inland waterway transport.

EFIP actively follows all European transport and environmental policy developments of importance for inland ports and their environment, and represents the latter vis-à-vis the European institutions. It also represents the inland ports with other national and international organisations active in the field of transport, such as the United Nations Economic Commission for Europe, the CCNR and the Danube Commission. As such, it develops and presents common positions on European policy issues of importance for inland ports and their economic and business environment.

The next meeting of the CESNI is scheduled for 15 April 2021 in Strasbourg. Barring unforeseen circumstances, the Committee looked forward to welcoming its members back to the Palais du Rhin.

A package of communication activities has been developed for 2020 to mark the 5th anniversary of the CESNI, which was set up and first met in June 2015. A dedicated press release and a quiz on the CESNI will be circulated in the coming weeks, via social media, emailing and on the CESNI website. It will allow participants to test their knowledge of the CESNI in an entertaining manner, while raising awareness of the Committee’s achievements in its 5 year-existence.

The special event pitched at inland navigation schools and training institutes, which was initially planned in November 2020 will be postponed in 2021. With the objective of raising awareness of and conducting a dialogue on the Committee’s missions and activities in the European inland navigation arena, the meeting should be organised in collaboration with EDINNA, the social partners and several local players. Additional information on this initiative will be distributed at a later date.