Strasbourg, 15 October 2019 – The European Committee for drawing up Standards in the field of Inland Navigation (CESNI) met in Strasbourg on Tuesday 15 October 2019. The meeting was chaired by Ms Lucia Luijten, a member of the Dutch delegation. Ten Member States (Austria, Belgium, Croatia, the Czech Republic, France, Germany, Luxembourg, the Netherlands, Slovakia and Switzerland) as well as  the European Commission, several  River Commissions (Sava, Rhine) and seven non-governmental organisations approved  by CESNI (EBA, EDINNA, EMH, GERC, IVR, ESO, EBU) took part in the meeting of the Committee.

The meeting was an opportunity to examine and discuss the various activities of the CESNI working groups concerning technical requirements for vessels (CESNI/PT), professional qualifications for navigation personnel (CESNI/QP) and information technologies (CESNI/TI), as well as to proceed with the election of the Chair and Vice-Chair of the Committee for the period 2020-2022.

One of CESNI’s fundamental roles is to assist its Member States in the uniform interpretation and application of standards, as well as to harmonise the rules for the standards application.

As an alternative to engines of the usual inland navigation engine categories (IWP/IWA), Regulation (EU) 2016/1628 (also known as the NRMM Regulation) permits the use of other engine categories such as engines for heavy-duty vehicles (EURO VI) and mobile machinery (NRE). However, the installation of such alternative engines on board inland navigation vessels requires modifications (for example, cooling systems). This process is called “marinisation”.

At its meeting on 15 October, the CESNI Committee decided to publish a guide aiming at clarifying the administrative procedure for the recognition and installation of marinised engines (NRE and Euro VI) on board inland navigation vessels in the framework of Regulation (EU) 2016/1628 and the ES-TRIN. This procedure needs indeed to be harmonised and transparent for the competent authorities, engine manufacturers and engine users alike.

The guide complements the frequently asked questions document (FAQ) already published earlier by the CESNI and EUROMOT to help understand and interpret the provisions related to engines.

The CESNI meeting was the occasion to present the findings and perspectives of the workshop on systems to prevent collisions with bridges and infrastructure held in Strasbourg on 26 September 2019 and chaired by Ms. Bärbel Hermann (Germany).

This event provided an opportunity to:

The workshop helped gather key information on the systems available to prevent collisions with bridges and infrastructure. The CESNI Committee now needs to decide how to continue the work, especially on possible minimum requirements for such systems.

Whereas the ES-TRIN 2019/1 should come into force within the regulatory frameworks of the EU and the CCNR on 1 January 2021, the CESNI continues to work on the preparation of the next edition of the ES-TRIN for adoption in October 2020. Particular attention is being paid to alternative propulsion systems enabling reductions in inland navigation vessel emissions, especially safety issues relating to lithium-ion batteries and fuel cells.

The CESNI adopted standards for certificates of qualification as a boatmaster and for certificates as a liquefied natural gas expert and as a passenger navigation expert, as well as standards for logbook, service record books and certificates for practical examination. The CESNI proposed 18 January 2022 as the date of entry into force of the standards. The standards could be included in an implementing act of the European Commission and in annexes to the Regulation for Rhine Navigation Personnel (RPN) in order to have harmonised models and instructions for filling in crew-related documents all over Europe.

For boatmasters and experts, the CESNI agreed on both an electronic and a physical format. The electronic format has an e-seal embedded in a PDF/A document and a 2D barcode serving as a link to the European Crew Database. Both the electronic and the physical format are designed in such a way that boatmasters will no longer need several documents to certify their competence as a boatmaster, their competence to sail on stretches with specific risks or their competence to sail with the help of radar. For crew members other than boatmasters, certificates of qualification e.g. as a boatman or as an engineer are also presented in a single document carrying a 2D barcode as a link to the European Crew Database.

The standards for logbook provide for a harmonised outer appearance and uniform instructions by setting up a simple numbering system for functions on board.

Two models of service record books were adopted, laying down harmonised instructions for the issuing authorities and for the document characteristics. Standards for the service record book for boatmasters enable the recording of service time on board in accordance with ADN requirements and the need to control navigation time on specific stretches or on large convoys. For all the above-mentioned documents, the CESNI also identified a harmonised way to facilitate the identification of the document by a serial number.

Finally, standards for the practical simulator examination certificate provide for a standardised format, certifying that a practical examination for obtaining a certificate of qualification as a boatmaster or for a specific authorisation for sailing with the aid of radar has been passed on a simulator, when the theoretical part of the examination took place elsewhere.

In November 2018, the CESNI adopted standards on:

During the preparation of the integration of these standards, also known as the European Standard for Qualifications in Inland Navigation (ES-QIN), in a delegated directive of the European Commission and in annexes to the Regulation for Rhine Navigation Personnel, the CESNI Secretariat worked out explanatory notices. These explanatory notices document the way the list of criteria for medical fitness and the standards related to the qualification for deck crew members in inland navigation have been identified. These notices are for documentation purposes only and are published on the CESNI website.

The four explanatory notices can be useful for social partners, training institutes and examiners. They describe the methodology used to draft each of the four sets of standards that are part of the 14 standards adopted in Prague as the ES-QIN 2018. Any future amendment of ES-QIN will be accompanied by a new explanatory notice.

The CESNI also decided to integrate the existing RIS expert groups in the CESNI’s organisational structure and procedures as four temporary working groups. The integration will ensure the continuation of the RIS expert groups’ work on RIS and the standardisation process, albeit with improved steering and secure secretariat support. 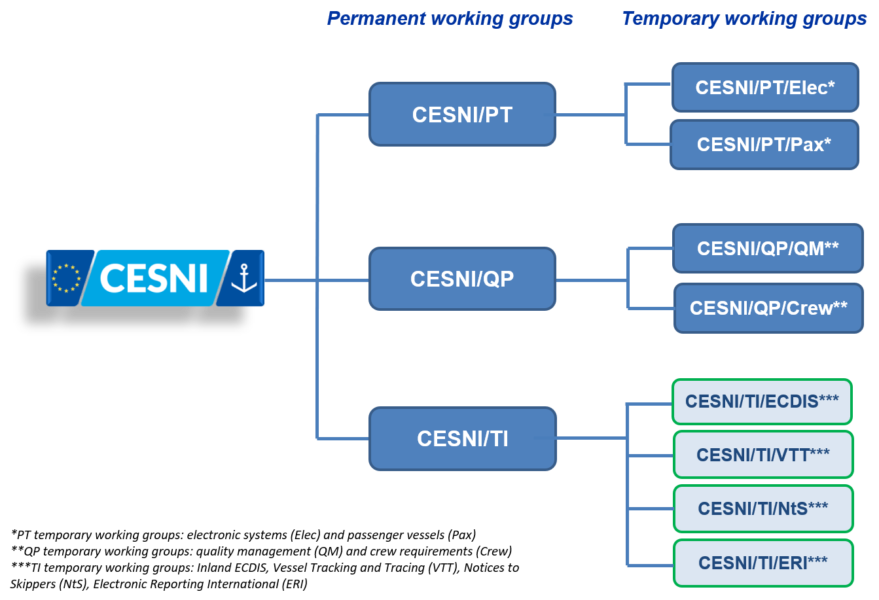 Collection of data on major accidents on inland waterways

The CESNI also addressed the collection of data on major accidents on inland waterways at the European level, in the light of the conclusions of the EU Council on inland waterway transport in 2018 and of the CESNI work programme for 2019-2021.

The CESNI would like to engage concerned parties in data collection on a regular basis, in close cooperation with DG MOVE, Eurostat and the IVR (International association for the representation of the mutual interests of the inland shipping and the insurance and for keeping the register of inland vessels in Europe), the latter of which organised a congress on this subject in Prague in June 2019, and thus welcomes all steps and ideas to bring it further.

More specifically, a mandate has been given to the Secretariat of the CESNI to organise a workshop in the second half of 2020, where data providers but also statistical offices and international bodies could exchange on their methodologies and the possibility to harmonise them. The organisation of this workshop is part of a step by step approach aiming at overcoming the obstacles caused by different definitions and methodologies. Furthermore, the lack of cooperation regarding data exchanges could be improved by determining a harmonised methodology and standards in Europe. This could eventually pave the way for a centralised international database that would allow a better comparison of data from various sources and could be the basis for a solid analysis to prevent similar accidents in the future.

Following the Presidency of CESNI by Mr Max Nilles (Luxembourg) from 2016 to 2017, the current Presidency for the period 2018-2019, with Ms Lucia Luijten as Chair (Netherlands) and Ms Vera Hofbauer (Austria) as Vice-Chair of the Committee, will end at the end of the year. The CESNI participants paid tribute to the excellent leadership of the Committee and commitment of the current Chair and Vice-Chair throughout the past two years.

Mr. Vojtech Dabrowski, representing the Czech Republic, will take over the Presidency of the Committee from January next year for the next two years (2020-2021). Mr. Dabrowski is Head of the Inland Navigation Unit within the Rail and Waterborne Transport Department, at the Ministry of Transport of the Czech Republic. He will be supported in his mandate by Mr. Hans-Peter Hadorn, representing Switzerland, who will take over as the Committee’s Vice-Chair. Mr. Hadorn is CEO of the Port of Switzerland.

The Committee congratulated Mr. Dabrowski and Mr. Hadorn for their unanimous election and wished them every success in the exercise of their future mandates.

Future meeting dates are to be found at the following address: https://www.cesni.eu/evenements