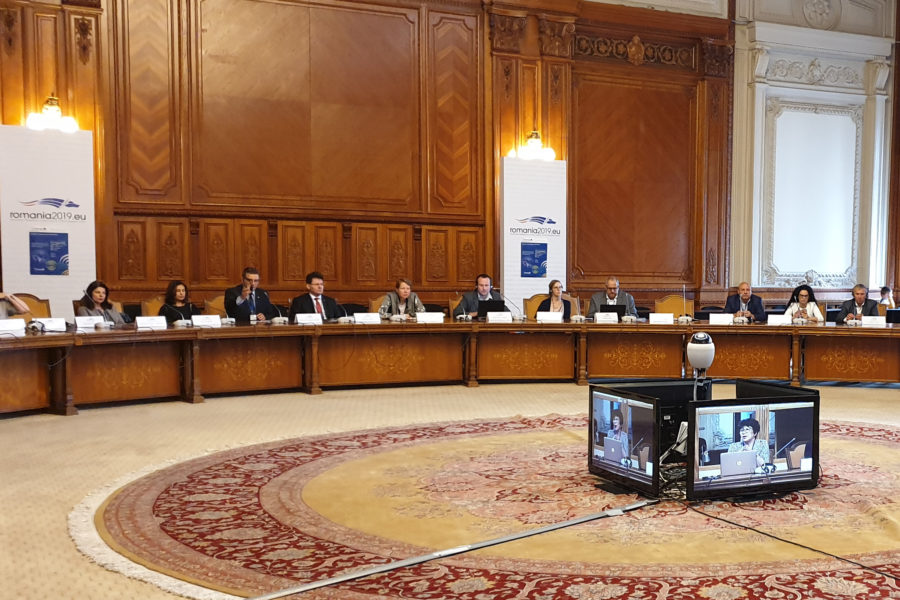 Bucarest, 09 May 2019 – The permanent working group on professional qualifications (CESNI/QP) and its new temporary working groups met for the first time on 07 and 08 May 2019 in Bucharest in Romania in the prestigious Palace of Parliament building. Holding the Presidency of the Council of the European Union until 30 June 2019, traversed by the Danube and boasting the largest inland navigation training school in the Danube basin (CERONAV), Romania has proved to be ideally suited for hosting almost 50 experts from 14 CESNI Member States, the European Commission, the river commissions, the social partners as well as partners in the Danube SKILLS project. These meetings mark the launch of the new activities of the CESNI work programme 2019-2021.

The meeting of the permanent working group was inaugurated by the Romanian Secretary of State for Transport, Mr. Ionel Minea on 08 May. Mr. Minea’s presence emphasised the importance of inland navigation to his country. Indeed, personnel of Romanian origin employed in the river-borne goods transport sector represent around 10% of the European Union total, and the number of operational cargo vessels corresponds to 11% of the European fleet (see “Market Overview – April 2019”). The representatives of the Danube SKILLS project had the opportunity of presenting both the project’s key results to CESNI/QP members and a comprehensive review of the implementation of directive (EU) 2017/2397 on the recognition of professional qualifications within the project partner countries. The meeting of the permanent working group was also the opportunity to discuss draft standards for basic training on deck-hand safety and for standardised communication phrases in four languages. Finally, on the subject of electronic certificates, the meeting provided the opportunity to reach agreement on a unique serial number and discuss the 2D bar code security features.

In the wings of the permanent working group meeting, on 07 and 08 May the two new temporary working groups buckled down to the ambitious tasks assigned to them by the CESNI Committee on10 April last.

The working group on quality management (CESNI/QP/QM) began work on 07 May. Among its many tasks, the working group will be responsible for preparing draft standards to evaluate and ensure the quality of training programmes and examinations, based on the competences defined by the CESNI.

For its part, the crew requirements working group (CESNI/QP/Crew) met on 08 May. The two sides of industry presented the findings of the TASCS (Towards a Sustainable Crewing System) study to the working group. Based on these findings, the working group will be required to draw up a recommendation for possible developments and modernisation of crew-related regulations.

The experts will meet again at the end of the summer in the city of Basel, on the Rhine, at the kind invitation of the Swiss delegation.